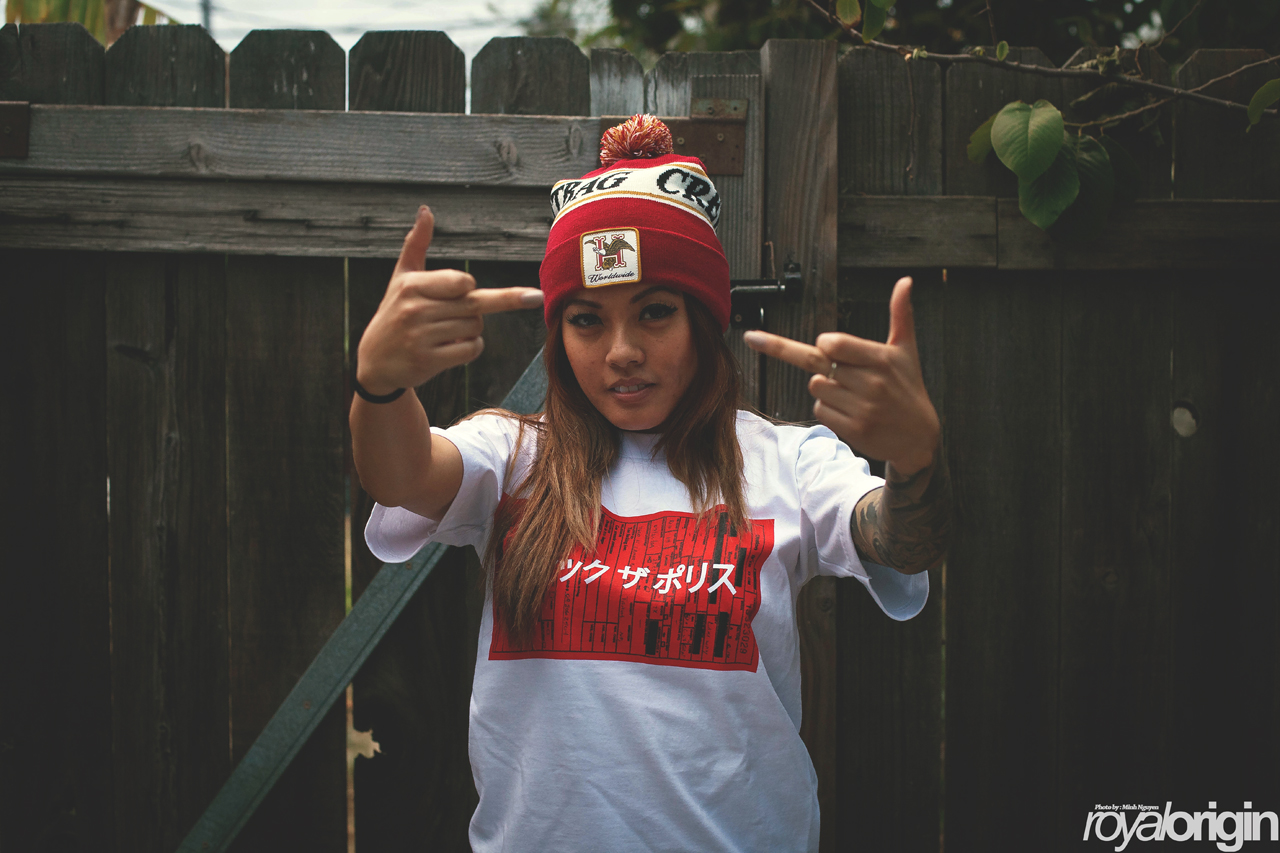 Thank you to everyone who posted their wonderful police stories. Originally, we were only going to give one shirt away, but since there were so many good stories we decided to give away 5 shirts.  We’ll share with you guys some pretty good stories before we show you our top five. The people that didn’t make the top 5 stories, we’ll be sending you folks a care package of stickers. So, if I posted your story here email us at RoyalOrigin@Royal-Origin.com with your address.

I was riding with my friend, and suddenly we heard sirens. We kept riding until they used that megaphone and said “PULL OVER.” We did, and they said “How old are you?” At this point I was shitting bricks and decided to answer everything truthfully- and then they said “We pulled you over because of no helmet, and you were riding on the sidewalk. It’s your lucky day, get lost.”

From then on, we learned that cop attitude was real.

Then this cop responded to the a complaint- I was drifting my previa and a neighbor called the cops. I parked the previa and the neighbor came with a cop- “YOU SEE ANYONE DRIFTING?” I said “yeah, I think it was a mustang…” The guy was like “No, it sounded like a VAN!” At that point too I shit bricks and told the truth. The cop ended up giving me a pep talk I’ll remember forever- he let me go, but not without telling my parents. He told me that I was representative of minorities (he was Latino, I’m Indian) as well, and that good behavior will stop people from judging us. He was a good guy- I’m always impressed that he chose to inspire me instead of throw me a ticket.

The third time I was driving my Miata back from my high school graduation, and got clocked on radar at 15 over the limit. I needed the bathroom BAD. The cop was a dick. I got a hefty $371 fine.

Even if I don’t get a shirt, if you guys read this, please take this advice! It really saved my ass. I ended up hiring a lawyer for $400 for both tickets, and he won both cases without me having to take traffic school or step a day in court. It is ALWAYS better to fight the ticket.”

Thanks Yousuf for your many stories and good advice on getting a lawyer for all your speeding tickets.

“Cop pulled me over saying I stole stock wheels from my own car. I told him I had receipts for the tires that were on them and he was like “How long do you think I’ve been a cop? Enough to know you’re bullshitting.” Nice to know they treat honest people like that. But he gave two of my friends tickets for curfew and I got no tickets. Texas smh.”

Cops are notorious for profiling. Glad you didn’t have to go through a lengthy process to prove ownership of your own set of wheels. Weird how a couple of years ago when our friend Tina had her Work Eurolines stolen from her Miata that the cops couldn’t do anything. We found her wheels at a car meet TWICE and called the cops both times and they said they couldn’t do anything unless we could prove that it was her wheels. We had a police report and a pretty good description of what was stolen too. One police officer actually suggested that we should go steal it back. Now that’s some shit.

Stories from our Instagram, we had to go through 100+ stories and these were our favorites. 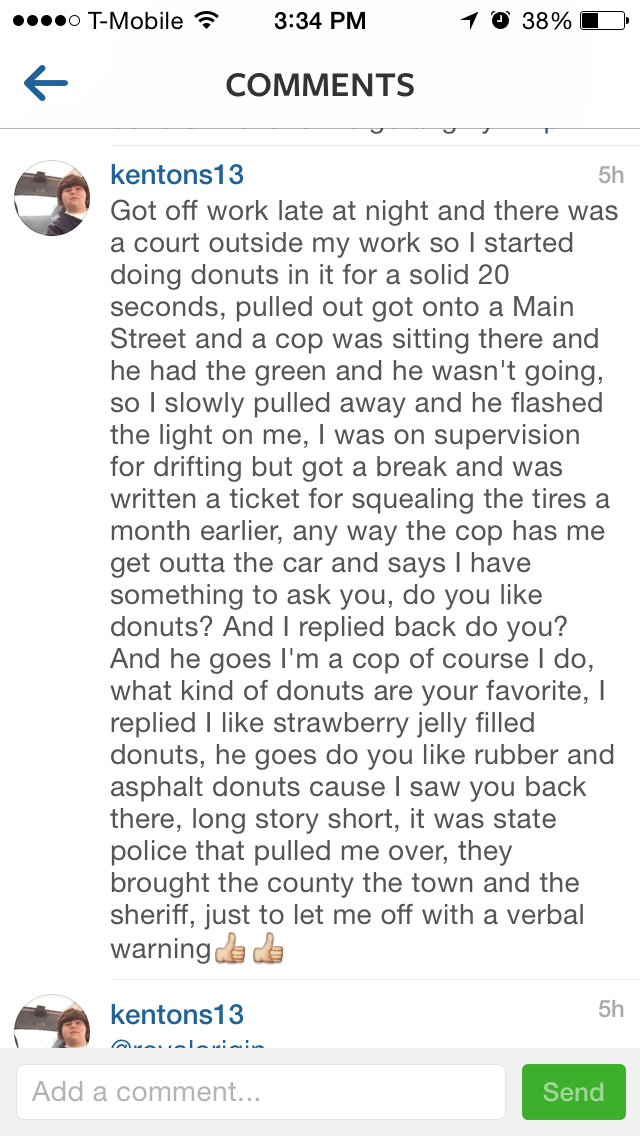 You know sometimes cops just want to talk about how much they love donuts. Cruising all day in the patrol car gets lonely. 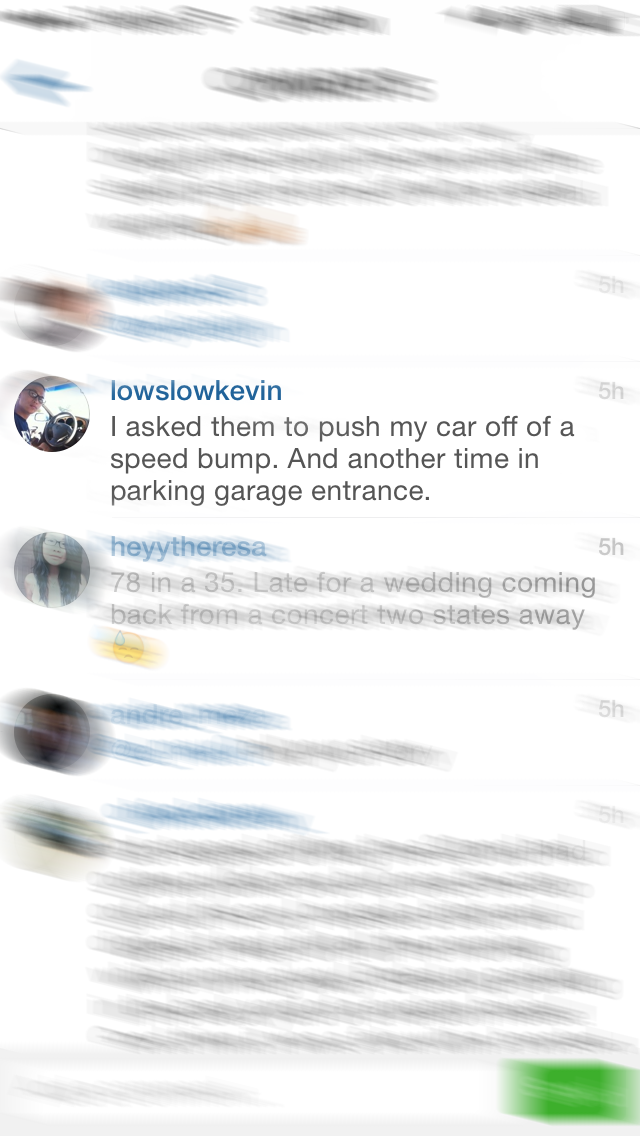 This is pretty ballsy to ask a cop to help you push your illegally modified car. 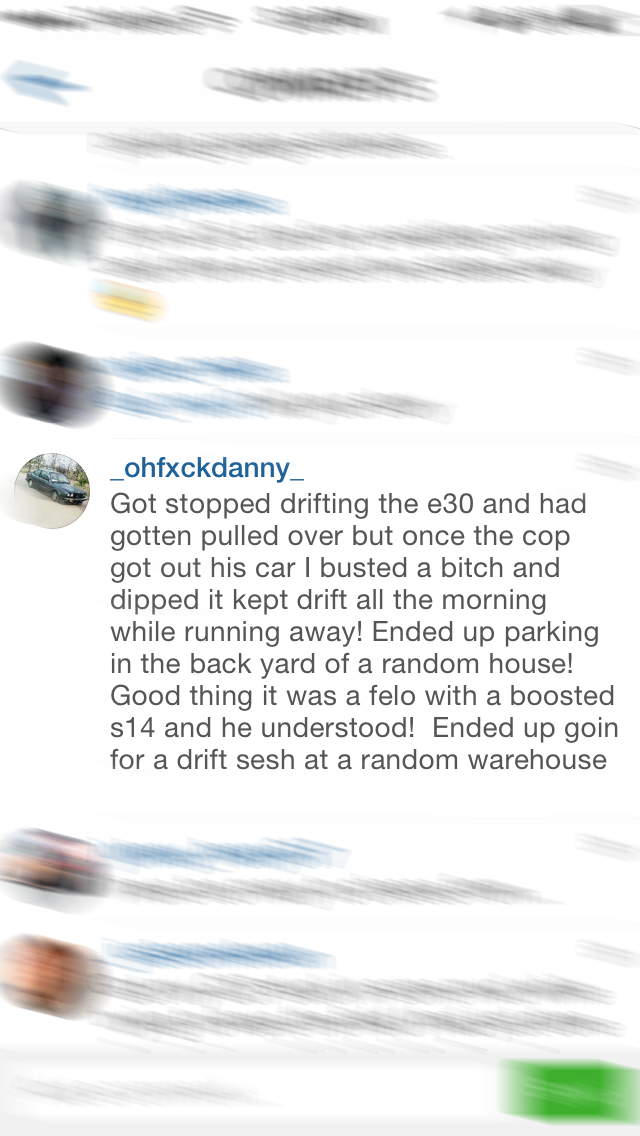 Running away from the cops, getting refuge from a fellow car enthusiasts and still being able to go drifting? That’s some fast and furious shit. 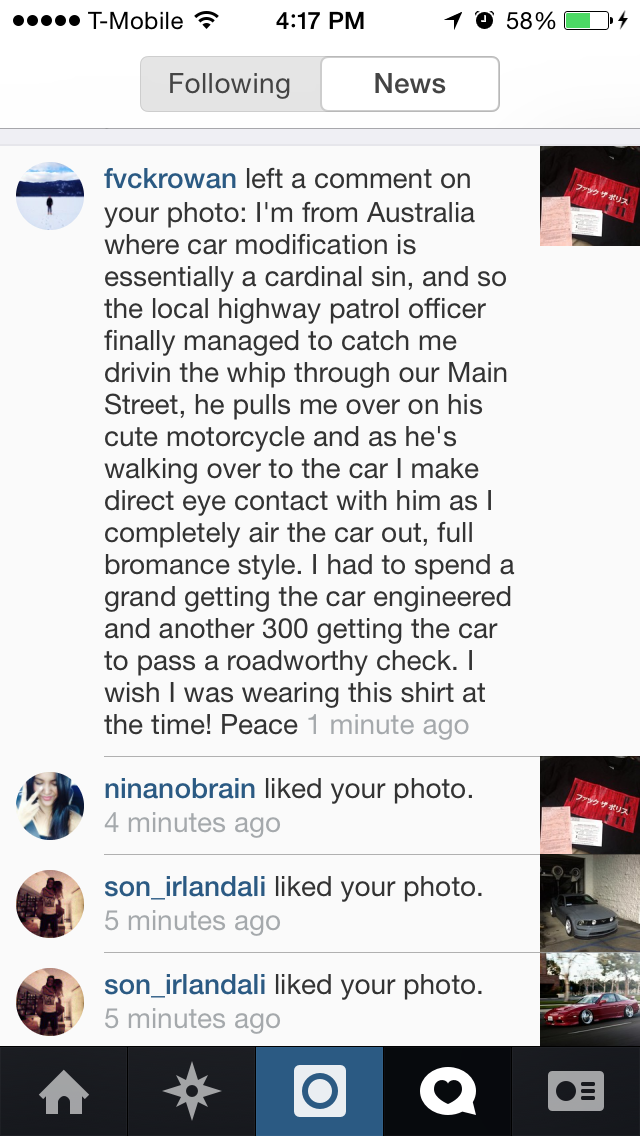 Looks like the Aussies have it pretty bad in the land down under. 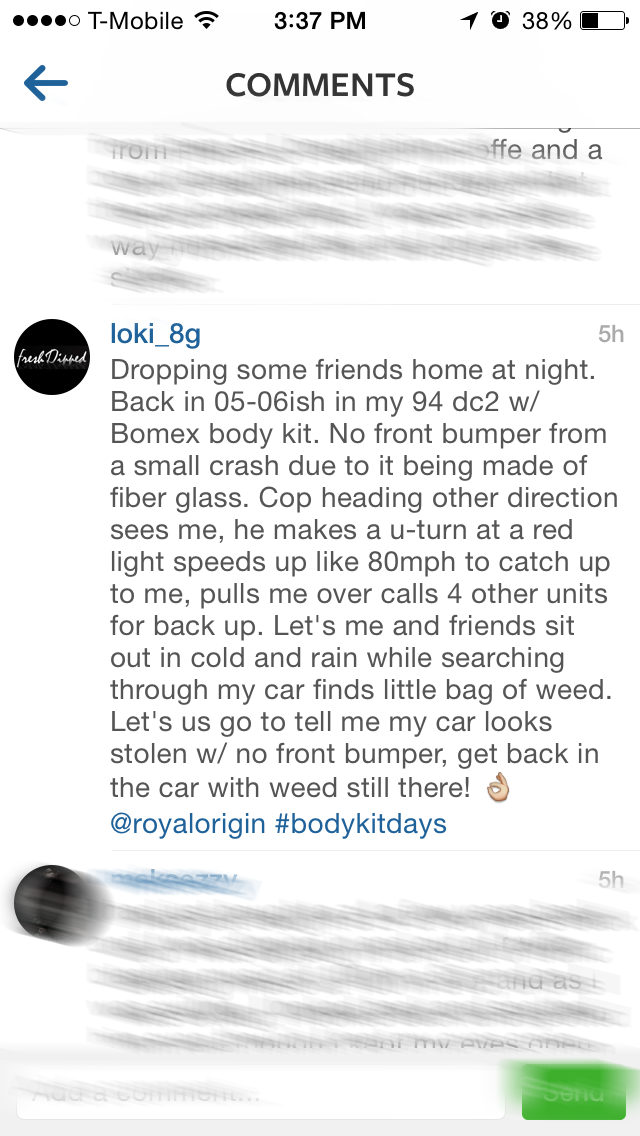 Note to self, do not roll around with out a front bumper. Cops will think it’s stolen. 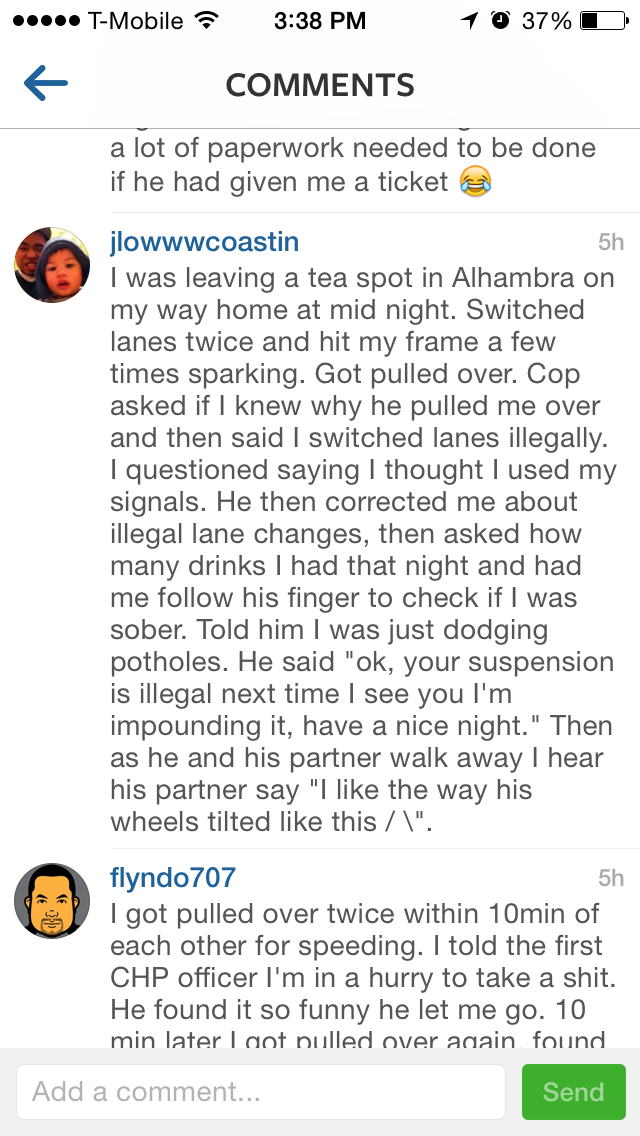 Cops are people too, it’s just they’re really shy and the only way they know how to approach a person is to pull them over. So, watch out if you have an awesome car you might attract this kind of attention. 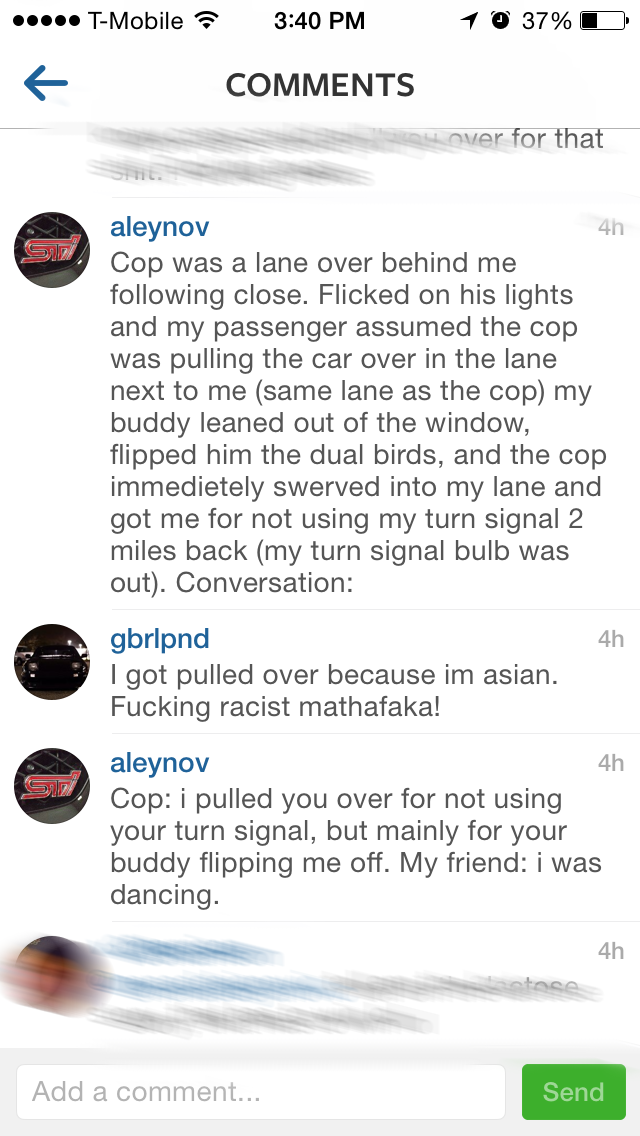 Your buddy has balls. 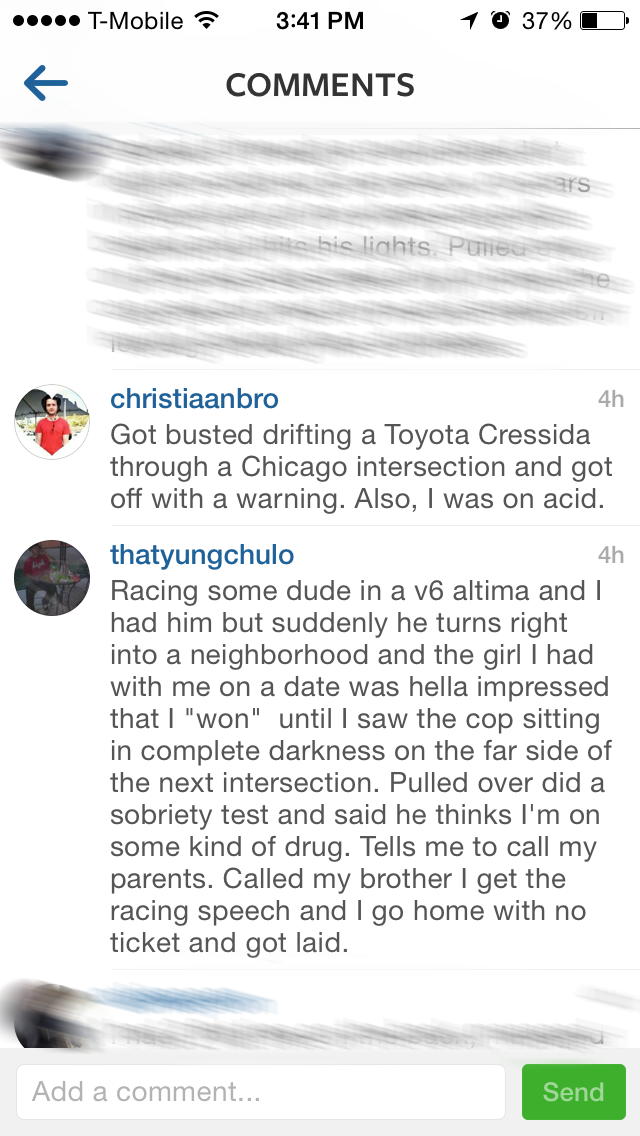 Drugs and cops go better than peanut butter and jelly. 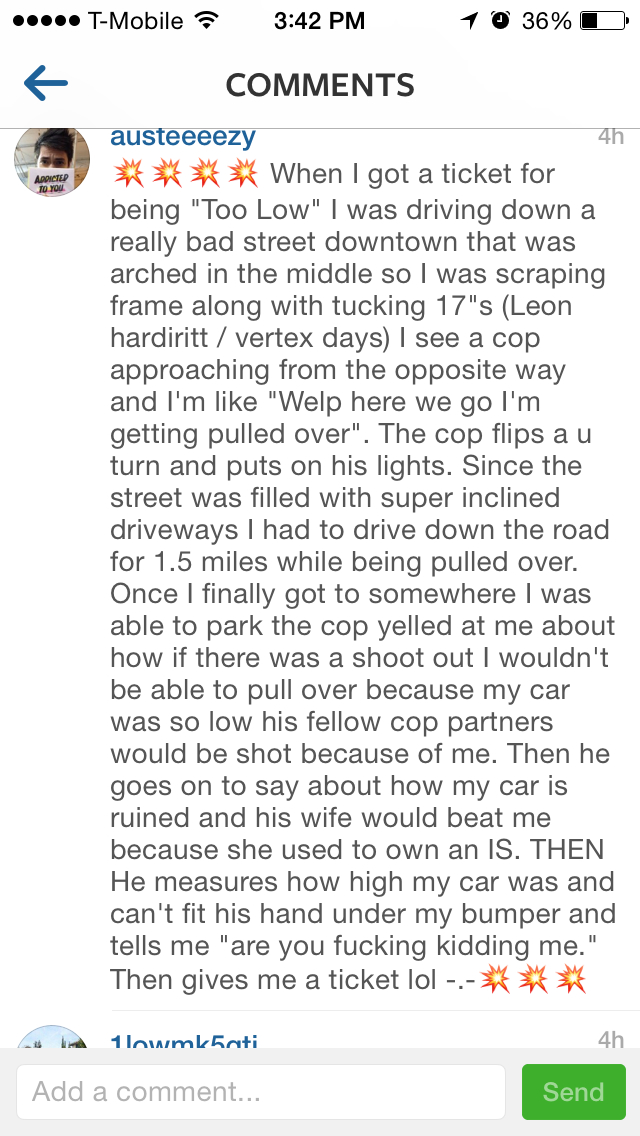 Sometimes cop’s wives are IS300 enthusiast. 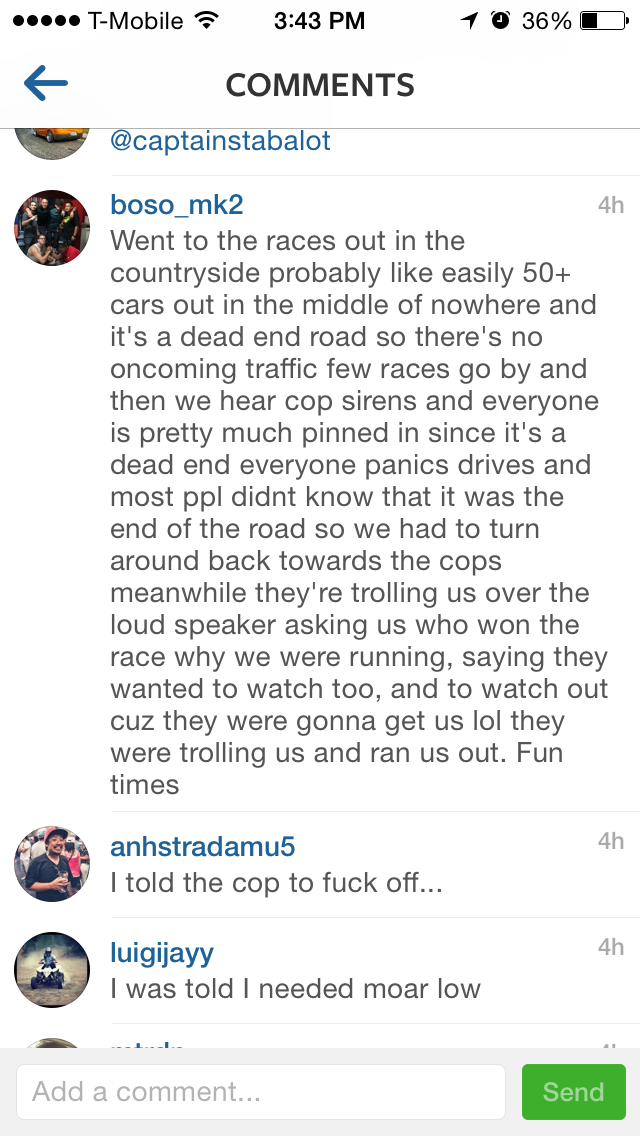 Trollin’ cops. I think this is something I would do if I was a police officer. 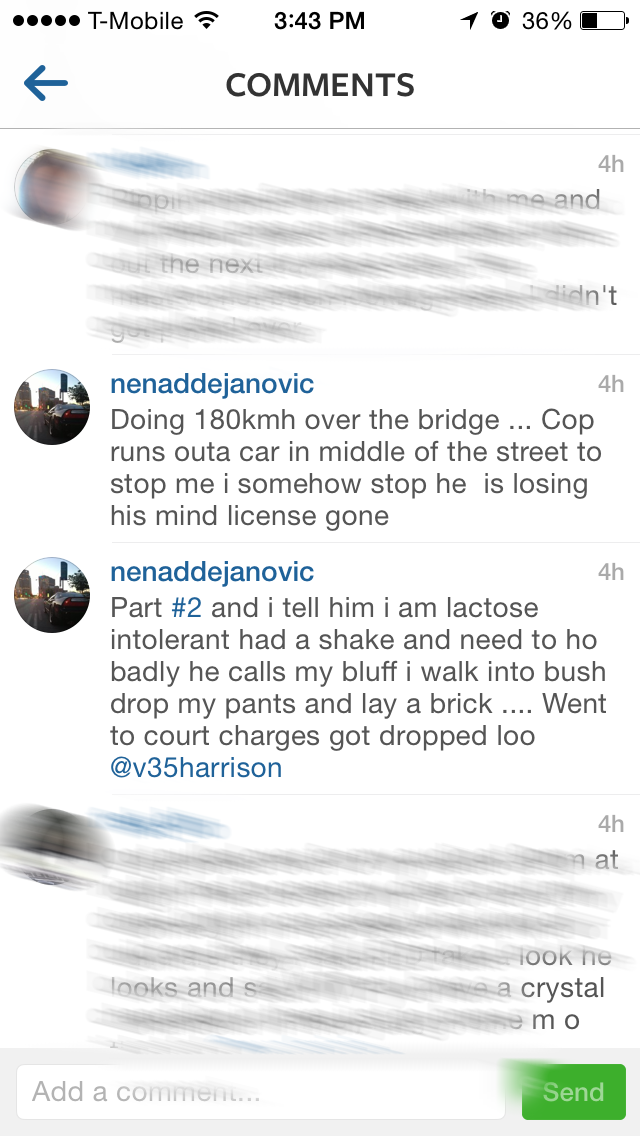 Who can say they took a shit in front of a cop? HAHAH 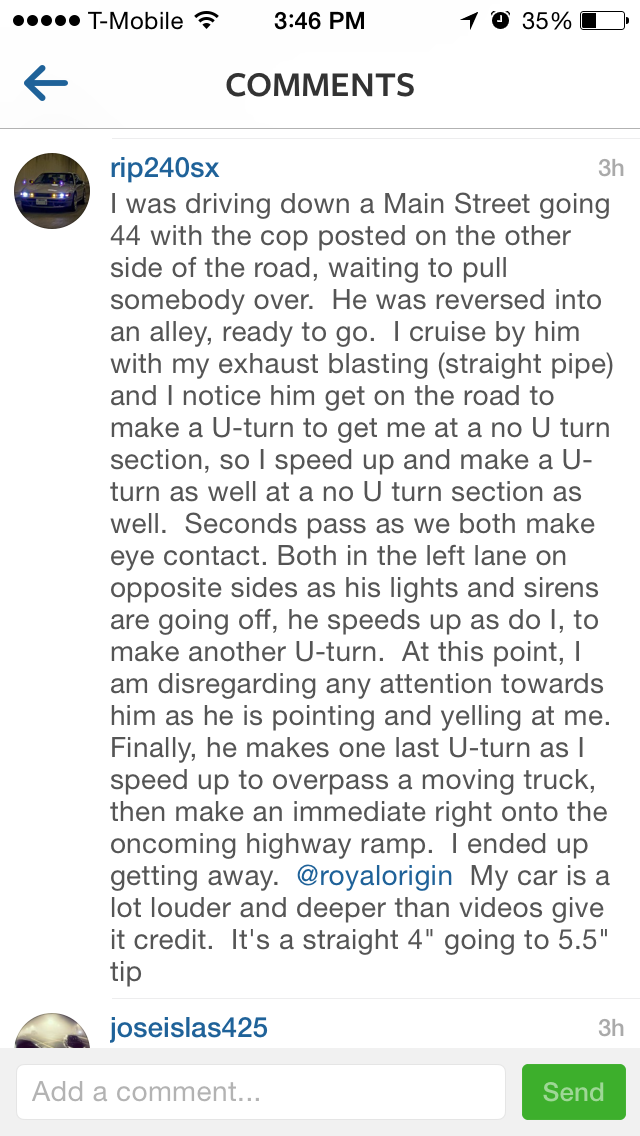 Well, I need to start practicing my U-turns. 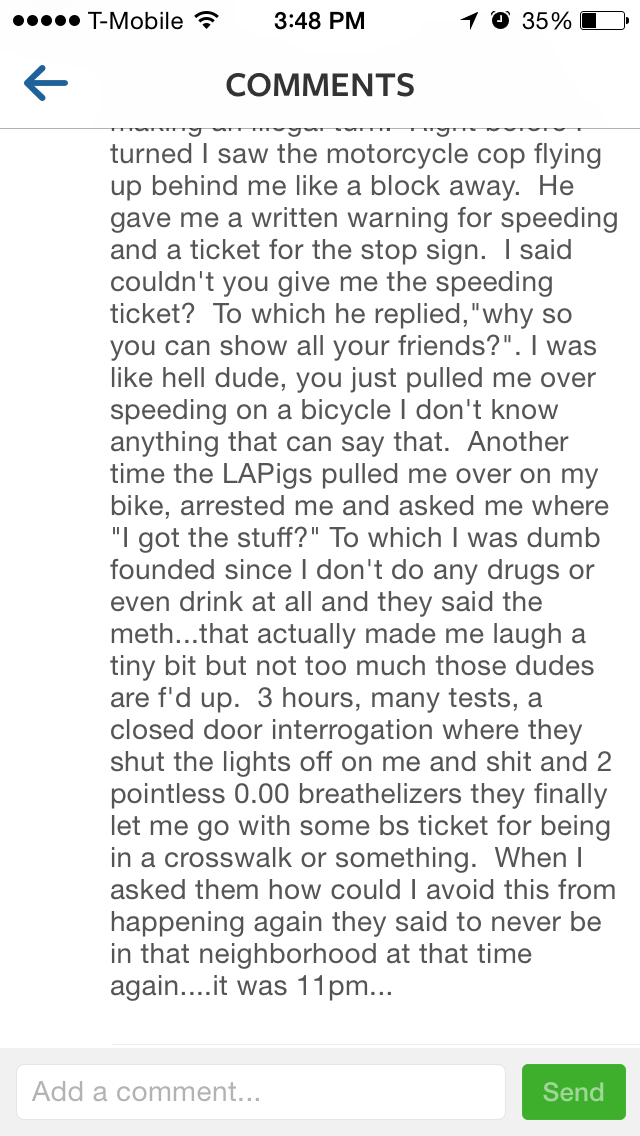 This is a story from @00trust00. The second part of the story is pretty intense. 3 hours of interrogations and drug tests just for being in a cross walk? 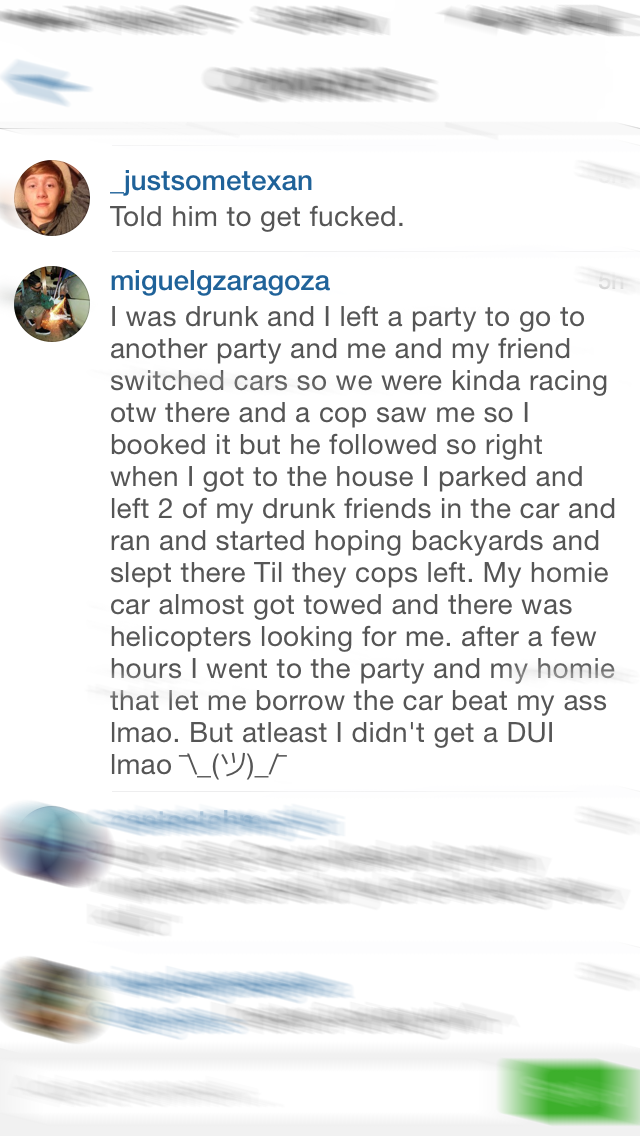 Well, this story comes from the Minty Z himself. I believe this story because Miguel is the type of guy to do something stupid like this. This is the guy that hit a curb, popped his tire, bent his $4,000 VIP Modulars and drove it into a neighborhood to nap because he was too drunk to deal with the situation at the time.

Thank you everyone for your stories, if you’re story was taken from Instagram just direct message our account with your address.